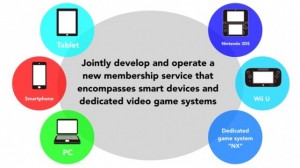 A diagram of Nintendo’s new service.

After years of speculation by press and fans alike, Nintendo has announced that it plans to start making games for mobile devices such as smart phones and tablets.

Nintendo recently signed a deal with Japanese mobile games publisher, DeNA, which will include “new gaming applications featuring Nintendo IP, which [both companies] will develop specifically for smart devices.” Nintendo proceeded to purchase 10 percent of DeNA, while the latter received 1.24 percent of Nintendo.

DeNA (pronounced D-N-A) is known for the Mobage platform, which is one of the most popular cell phone gaming platforms in Japan, as well as publisher ngmoco, which has released title such as: Rolando, Topple, and We Rule.

As part of this agreement, Nintendo confirmed it will be developing “a core system compatible with a variety of devices including PCs, smartphones, and tablets, as well as Nintendo’s dedicated video game systems”. What this “core system” is is unclear at the moment, but many speculate that it could be a new social network or a digital streaming service.

Nintendo went on to state that it is not interested in porting older games to mobiles but would rather create new, original games that will be “optimized for smart devices”. Nintendo has confirmed that its new mobile services and games will be built for iOS and Android platforms and that it is not restricting any IP for mobile platforms. This means that possibilities are open for mobile games based on major franchises such as Mario, Zelda, Star Fox, Metroid, Animal Crossing, and others.

During a press conference on Tuesday, chief executive Satoru Iwata explained that the n”core system” will “encompass the existing Nintendo 3DS and Wii U systems,” as well as a an all-new hardware system, codenamed the “NX”.

This announcement comes as relief to hardcore Nintendo fans who feared that Nintendo would abandon their hardware roots and jump straight into making smart phone games.