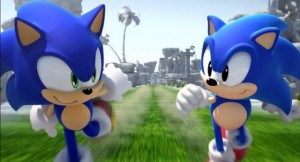 It has been eons since I’ve played a new Sonic game that was truly enjoyable. Many Sonic fans older than 8 will agree with me when I say that the last true Sonic game was Sonic Adventure 2 for the Dreamcast/Gamecube.

However, it seems as if Sonic has redeemed himself with 2 steps in the right direction. The first step being Sonic Colors and the second being Sonic Generations – a dream come true for two decades of Sonic fans.

The plot involves Modern (post Adventure) Sonic and Class (Pre-1998) Sonic as they battle against an unknown force that has goofed up space-time and threatens destroy reality as we know it. They relive each others’ memories, zooming through iconic zone from nine different Sonic games in three different eras: Classic/Genesis (1991-1998), Dreamcast (1998-2004), and Modern (2004 – 2011).

The levels take the best moments from Sonic’s 20 years of gaming and upgrade them. With Classic Sonic playing Act 1 of a zone and Modern Sonic playing Act 2, you get to experience all your favorite levels in 2D and in 3D!

However, neither Sonic is perfect. It’s easy to forget that 2D Sonic lacks his 3D counterpart’s homing attack, leading to some incidental ring loss and occasional deaths. And for some strange Modern Sonic can’t do a Spin Dash, but rather a Slide-Kick. But these are small complaints as the game features non-stop action in every level.

After completing both Acts of a Zone, Challenges will unlock. These include facing off against giant enemies, using classic shields to traverse dangerous death traps, and teaming up with friends to overcome. Most of the Challenges are fun and actually quite challenging, however there are still some lame “challenges” (if you can call ‘em that).

The only time Sonic Generations lets Sonic fans down is with the limited number of boss battles, and lackluster Chaos Emerald levels. The Sonics battle a mere four bosses in the entire game, two of which are very short. What happened to the days of a boss after every level? The Chaos Emeralds are unlocked through the bosses, and the Rival Battle stages, which are like mini-bosses against Sonic’s more annoying clones, Shadow, Silver, and Metal Sonic. This game needed a separate Chaos Emerald stage, a trippy, dizzying, infuriatingly difficult mini-game that makes you earn the emeralds, instead of just being given them.

The game doesn’t take itself too seriously, mining nostalgia for laughs. There are references to chili dogs and Dr. Eggman’s old moniker — Dr. Robotnik — offering plenty of fan service alongside visual tributes to the stages Sonic fans have played over the years.

The nostalgia that makes this game so great also hinders it from attaining perfection. While riffing on levels from the past, I never quite got the feeling that the plot or levels would surprise me.

Now if we can stick to this style of game play and insert a fresh story into the mix, I believe Sega will have created the ultimate Sonic sequel. This side of the millennium, that is.

If you’re looking for a colorful, upbeat game that has as many addictive challenges as it has nostalgic moments, Sonic Generations is a good bet. The game is available on the Xbox 360, Playstation 3, and PC.