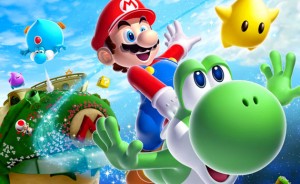 The bright, creative, and cartoony design immediately welcomes you into this colorful world, and the catchy soundtrack mixes classic tunes with new compositions to provide the perfect backdrop as you zoom around the galaxy looking for coins, bits, and stars. But it’s the expertly designed levels that will keep you coming back, even after you’ve seen everything this game has to offer, just to experience it one more time. This is an instant classic that belongs alongside the best games Nintendo has ever created.

Things are once again rotten in the Mushroom Kingdom as Bowser has yet again kidnapped Princess Peach for the (insert over 9,000 joke here) time. The best thing that can be said about the story is that it mostly stays in the background. A few lighthearted exchanges between Mario and his foes precede major battles, but there is only a brief break in the action before you get back to flinging fireballs and cracking shells. Which is what most gamers want, right?

While others may have complained about the “faceship”, I like it as it is easy-to-navigate and lets you hop right into the next level. Galaxy 2 has less downtime than the original, ensuring you’re always engaged and entertained.

I must that I am very impressed with the levels. They were all well thought-out, creative, and action-packed. There are levels that change the gravitational pull to make the ceiling of a level into the floor. Things like that. But those ideas have been expanded on with new twists and capabilities, and each “galaxy” to explore impresses in their own way. Whether it’s a twist on an old-school game mechanic or a throwback reference to a past Mario game, Super Mario Galaxy 2 constantly impresses with just tons of small but significant elements, one level after another.

The designers passionately embrace Mario’s old-school legacy with 2D-style platforming that makes New Super Mario Bros. Wii look like a third-party budget title. The game will shift from a 3D, go anywhere design to forced 2D side-scrolling and back again, on the fly and with a completely natural camera. Or how the game will offer hints on how to get through a challenge by peppering the area with clues – both subtle and blatant.

Plus Nintendo gave us Luigi & Yoshi as playable characters! I will admit I was afraid I was going to be disappointed, but Nintendo has handled Yoshi with far more care and attention than he ever was in Super Mario Sunshine. When players leap to control Yoshi, it’s a very different – but also very familiar – experience than when Mario’s running around on his own. Yoshi has just as tight and intuitive controls, including the ability to tongue lash at objects and hooks using the Wii remote’s pointer capabilities. This point-and-click mechanism never feels out of place because you’re already focused on grabbing at Star Bits with the pointer controls.

Super Mario Galaxy 2 has some of the best visuals the Wii has ever seen and a beautiful soundtrack that is even more intense with far more orchestral and studio recordings than the last game!

Super Mario Galaxy 2 is one heck of game, in fact many believe that it could be one of the best games ever! It never takes a break for a second, constantly presenting new objectives and mechanics to push you to never before seen places. Even the two-player mode offers new abilities and delights, making it even more fun to play with a friend by your side. Everything is so well designed and so entertaining that it’s easy to get sucked into this world for hours!